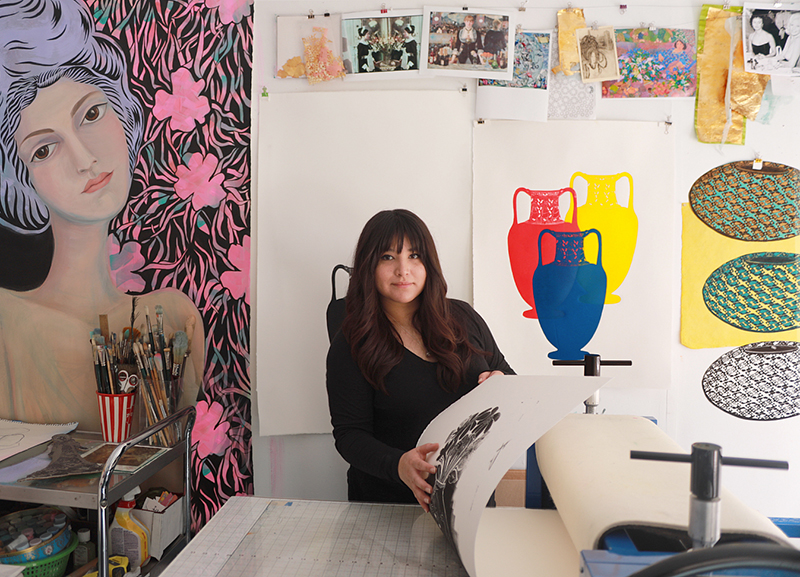 Stephanie Mercado is an artist from Los Angeles. She works with a variety of media including painting, printmaking, textiles and ceramics. She received a Bachelor of Fine Arts degree in Drawing and Painting from California State University Long Beach, where she also developed a printmaking practice. While at CSULB she was awarded a merit scholarship to study abroad in Florence, Italy. In 2008 she completed an independent artist residency in Rome and in 2013 she completed an artist residency in Austin, Texas with Coronado Studios. Her work can be found in the permanent collection of the Mexic-Arte Museum in Austin, Texas. She has exhibited internationally including shows in Norway, Italy, Spain and British Columbia. She has also exhibited in Colorado, Chicago, Indiana, and Texas within the United States. Recently, she was awarded a Career Development Award by the International Print Center in New York.

​​Stephanie Mercado’s paintings and prints examine and interpret how history is recorded. She merges historical imagery with contemporary pop-culture, transforming the narrative by introducing gaudy gold chains and cartoonish dollar bills. These contemporary elements reveal how the power of images has influenced American culture, fostering the proverbial “American Dream”. Mercado’s recent portraits of maids tell a story about power, class, and human relationships. They explore themes of subjugation and the nuances by which people try to maintain their identity, dignity, and independence. Their black and white uniforms depersonalize the figures, creating archetypes and defining roles the characters are expected to play. Contrasting elements in their environment interrupt and create alternative narratives in an exploration of self-realization and identity. Each figure is caught in a place between reality and a world that is deformed and shaped by the people who control their environment and their livelihood.